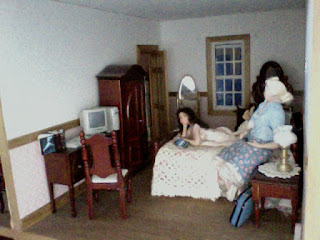 Cassie McKreedy was so lost in the e-book on her ipad, that she almost missed hearing the pounding on her front door.   Reading the time at the top of the screen, her annoyance at being bothered turned to apprehension, as no one with good news shows up at your door at 11:30 pm.  "Hang on...I'm coming!" she shouted down the hallway.

Throwing on a robe, she padded across the stairs in bare feet, flipping on several lights as she passed by.  She peered through the oak door's peep hole, and frowning, unbolted the lock.  In the glow from the street light, Cassie could tell the blond woman standing on her porch was near tears.  She grabbed the woman's arm and roughly pulled her inside, slamming and locking the door behind her.
"What the hell are you doing here?  I specifically told you it was too risky to come here right now!  You gotta be a frickn' idiot, Elizabeth!"

The young woman's lower lip quivered.  "I had nowhere else to go!  I couldn't stay in that B and B by myself anymore.  Oh Cassie...I'm so scared.  What if somebody finds out?  I can't go to prison.  I'm not cut out for that kind of thing.  Please...we have to do something!  Get out of here...go some place where people don't know us!"

"Chill, already!  It's going to be fine.  I'm handling it on my end.  Let's go upstairs.  With the lights on, the whole neighborhood can see us through the front window.  You must of woken the entire street up with that pounding.  Where's your luggage?"

"It's still on the front porch."

"Oh for heaven's sake!"  Cassie unbolted the door and quickly dragged the suitcases into the foyer.  "You didn't have the taxi drop you off here, did you?"

Elizabeth sniffled, and wiped her eyes.  "No.  I had him drop me three blocks away, and I walked here."

"Well, thank heavens for little favors.  Come on, we'll talk in my room." Cassie grumbled, turning the lights off, and leaving them both in darkness.

Elizabeth followed her up the stairs, dragging the suitcases behind her.  Cassie's take charge personality made her feel better already.  It had always been that way,  ever since the two were small children.  Cassie would create grand schemes and games, and Elizabeth would let herself be talked into them, her fear turning into joy at being included in Cassie's magical, make-believe world.  She often wondered if it was this same creative genius, her ability to lose herself in fantasy, that caused Cassie's agoraphobia issues.  In the whole scheme of things, it mattered little, as in Elizabeth's eyes, Cassie walked on water.

Even though one woman was a brunette, and the other a blond, looking at them a person could easily tell they were related.  Both  girls had lively green eyes, slim figures, and the same turned up nose anchoring their face.  They could pass for sisters, and often were, though in actuality,  they were only first cousins.  Reaching her bedroom, Cassie flopped across the mattress, and patted the end of the bed for Elizabeth to sit."

"Now, Lizzie," using her cousin's childhood name, "tell me what has you so spooked that you'd risk everything to come here?"

Elizabeth leaned against the headboard, and sighed, "Oh Cassie,  I'm so afraid! With Rivera dead, some one's bound to find out!"