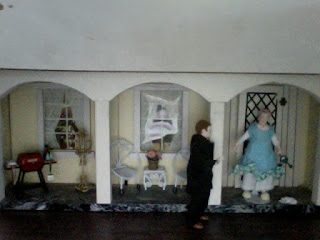 Fr. Kevin whistled a cheerful tune as he made his way down the street after his visit with Cassie McKreedy.  "That went well," he thought.  The two had settled down for a nice long conversation, and although he was sure the girl had some serious issues, he found her to be a charming and intelligent young lady.  She had told him about her job as a CPA for  Fickleman and Fines, the largest financial planning and accounting firm in town.  They understood her disability, and allowed her to work from home, where she handled the books for several businesses in Dollyville, including the accounts for Holy Family.  They laughed over the fact that she knew more about the business end of the parish then he did.

During the conversation, she had confessed that the beautiful and spacious home had actually belonged to her parents, who were both deceased, and that despite the fact she rambled around in it, didn't have the heart to sell.  Fr. O'Kenney had gotten her to promise to allow him to bring the Eucharist and hear confession on the first Friday of every month, and to keep in touch via phone and email.  He felt as if he had made some solid headway in building a relationship with this isolated young woman, and for the first time since his arrival at Holy Family, felt as if he were actually pastoring his flock.

Deciding to treat himself to an iced double mocha latte, he crossed the street and headed toward the coffee shop.  He was lost in a reverie, when he heard someone screeching his name.

Turning around, he noticed an elderly woman waving to him from the porch of a bright yellow bi- level home.  His stomach dropped when he recognized the woman, and he felt guilty that he wasn't able to rise above his personal feelings.  It was Tessa Peppers, a long time parishioner of Holy Family, and probably the most obnoxious person he had ever run into.  Every Sunday, after Mass, Mrs. Peppers stopped him at the exit of the church, to complain about everything under the sun, and suggest a multitude of ways he could, and should, improve his homilies.  He didn't understand how she commanded such a wide circle of friends with her grating personality, but she seemed to be a mover and shaker in Dollyville, and he held his tongue, and used up most of his patience, when dealing with her.

"Good Morning, Mrs. Peppers.  What can I do for you this fine day"

" Well, I noticed you were over at Cassie McKreedy's, and I wondered what was going on."

"Going on?  Whatever do you mean?"

"Well Father, you were there quite a long time, and people get to talking.  Does Cassie have a spiritual problem she needed to talk over?  Is she ill?  You know...she does have that "thing" where she doesn't leave the house.  Quite odd, don't you think?  I don't believe she's been out of the house for an entire month.  That's the way it is with young people today.  All spoiled cry babies.  Mark my words, Father O'Kenney, all that woman needs is a strong minded husband, and a good swift kick in the ass."

The titles of the books on Cassie's shelves, and the appearance of the handcuffs, made Fr. Kevin think that Mrs. Peppers was more right than she knew.  Cassie McKreedy would probably very much like a "strong minded" husband, but he wasn't about to share any of that with the viper tongued Tessa.  Trying desperately to change the subject, the priest moved over to the garden and asked, "Your hydrangeas are absolutely stunning, Mrs. Peppers.   What do you do to get them this vibrant shade of blue?"  Before the words left his mouth, he regretted saying them, and opening the door for her next spew of words.

" Speaking of flowers and gardens, Father, what is happening with the Rivera murder?  Has Sheriff Beckett caught the killer yet?  You must tell me what you know!  I'm a defenseless widow woman living by myself.  I need to take precautions against vicious murderers.  It's shameful the way this town is going to Hell in a hand basket!  No authority what's so ever.  You must be disgusted that a man died on holy ground...your holy ground I might add.  I'm sure you want justice served, don't you Father?  When I'm mayor of this lawless town, things will be different!"

"Why yes, Fr. O'Kenney.  Don't you follow the news in your own village?  I'm running for Mayor in this fall's election.  I've been a devoted Town Council member for over twenty years.  Nobody knows what Dollyville needs more than I.  I do hope I can count on your support, Fr. O'Kenney?  Having the Mayor as a member of your congregation...well, you don't need me to tell you what that could do for your little church.  Here Father, take a seat, and we'll chat about things."

Not knowing how to wrangle himself out of this situation, Fr. Kevin slid himself into one of the uncomfortable metal chairs on her porch, thinking he knew exactly how a fly must feel caught in the sticky tangles of a spider's web.