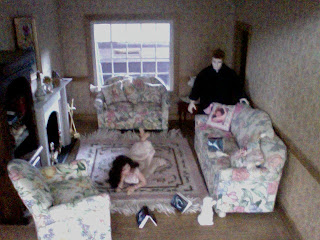 Fr. Kevin had seen enough episodes of CSI and Law and Order to know that evidence found at the scene of the crime had to be handled carefully.  Instructing Irwin to place the rosary and the glove back on the ground where he found it, and not to touch it again, he ran to the rectory to get some "make-do" evidence bags.

Using an old chopstick left from last week's carry-out, he picked up the rosary and placed it carefully in a Ziploc sandwich bag.  He then did the same with the leather glove, hoping the bag wasn't one he had used previously to hold his reefer.  On his way to visit the home bound, he'd stop at the Sheriff's office and drop off the evidence.  If things were going his way, maybe Beckett even had a lead
on Marco's murder, and he could remove the crime scene tape wrapped around the front of his church before Sunday's Masses.

Wandering through Dollyville, he was rather surprised that people seemed to be going about their business, oblivious to the fact that a man had been murdered in their neighborhood, and had yet to be caught.  He would have expected people to be cautious and worried, and the opposite seemed to be true.  People scurried about, talking and laughing, and occasionally throwing a greeting his way.  Not for the first time,  Fr. Kevin mused about the strangeness of the people of this town.

He looked over the list of parishioners he needed to visit and decide he'd check in with Cassie McKreedy first.  He wasn't sure what to expect, as he had never met her before.  Being an agoraphobic, she rarely left her home, and of course, never came to the church with the rest of the congregation for Mass.  He wasn't even sure how old she was, as the list he had gave only names, addresses and general infirmities.  Looking at the sprawling white Colonial, he assumed she must be up in years, and apparently, quite wealthy.  He went up the steps, a bit nervous, and rang the bell.

Fr. O'Kenney took a deep breath, and let himself into the house.  He looked around the foyer, but could see no one to invite him further. "Uh...hello?   It's Fr. O'Kenney, from Holy Family Church.
Umm...I've come to see Ms. Cassie McKreedy."

Assuming the woman was unable to come to the door, he wandered his way into the parlor and was shocked to see a young lady in her twenties, lying on the floor with her head stuck under a chair.  "Ms. McKreedy, are you alright?  Can I help you get up?  Call for an ambulance?"

"I'm fine Father.  I'm just looking for something.  Maybe you can give me a hand?" She pulled her head out from under the chair, and struggled to stand up, waiting for the confused priest to offer her his arm.  Around her wrists, she was bound with a set of shiny, metal handcuffs. "I've seemed to have lost the key.  I believe I've dropped it behind this chair.  Can you take a look for me?  My mobility is a bit...limited this way."


Fr. Kevin dropped to his knees, and blindly dug around under the chair.  After a few moments of patting the floor, he felt the metal key.  Standing back up, he unlocked the cuffs on her wrists.   "Ms. McKreedy, I know we haven't been formally introduced, and I realize it's probably none of my business, but can I ask why you are wearing handcuffs?"

Cassie hesitated a moment, and said, "Uh ...well...it's a new type of therapy my doctor is trying for my agoraphobia.  I'm not sure it's working."  Changing the subject, she cheerfully asked, "Father, can I get you something to drink?   Coffee, iced tea perhaps?

"Coffee would be lovely.  Thank you Ms. McKreedy."

"Oh, for sure you can call me Cassie, Father.  I'll be right back with your coffee.  Cream or sugar?"

"Both, thank you.  Boston style if you please"

" No problem.   Make yourself comfortable,  I'll be back in a jiff, " she remarked, as she headed toward the back of the large house.

Fr. Kevin used the opportunity to wander about the parlor, looking for clues to the woman's personality and interests.  The room was obviously femine in design, papered in shades of taupe and pink, with over stuffed furniture, pillows and knick knacks.  He was drawn to a large bookcase, which held shelves of both hardcover and paperback books, and a large plaster statue of the Last Supper.  He smiled at the classic rendition of that sacred moment, and perused the titles on the spines of the books. The Woman in the Collar?  Make, Me Master?  Tie Me Tight?  The collection went on and on.
As recognition finally hit him, Fr. O'Kenney suddenly wished he had decided to visit old Mrs. Springer today, instead of ...odd... Ms. McKreedy.

Cassie returned, carrying a tray with two cups of steaming coffee, and a plate of delicate pastries.  In her head, she thought that the young priest seemed nice enough, and luckily, appeared pretty clueless.   She was certainly grateful that she had decided to try out the handcuffs today, and not the some of the other equipment she had ordered.  She wondered what he might know about Marco's murder, and who else he had visited today.  A little chat might be in order.  "Here we are.  I do hope you enjoy pastry, Fr. O'Kenney?  It's from that little bakery on Third Street.  I have it delivered fresh everyday.  Now, let's sit and talk a bit, shall we?" 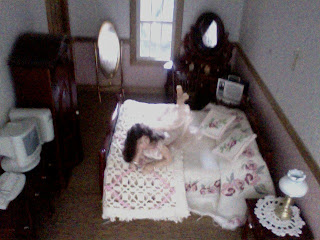 (Just a little side note ...notice Cassie's little handcuffs?  I
thought they turned out rather nicely, don't you?  LOL)