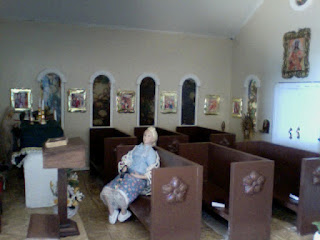 Fr. Kevin Seamus O'Kenney rolled his bike to a stop near the chapel's steps.  He considered asking Marco about his rather strange, unseasonal attire, but decided to hold his tongue.  The gardner usually answered him in terse grunts, pretending to have a limited comprehension of the English language. Kevin knew damn well that Marco spoke perfectly respectable English, but chose not to grace him with that skill.  Why was something he had yet to discover, but today wasn't the day to find out.  The man looked exceptionally surly this morning, and was muttering under his breath to no one in particular.

"No skin off my nose if he wants to sweat his ass off," mumbled Fr. O'Kenney, knowing the man couldn't hear a word he said.

He set the kick stand on the bike and hustled around the church to the rectory.  If he hurried, he could catch a shower and a bowl of Lucky Charms before 8:30 Mass.  The morning bike ride around Dollyville was  a luxury he had no time for, but one he thoroughly enjoyed.  It gave him a sense of freedom that usually escaped him as Pastor, and only clergyman, of Holy Family Parish.  He mentally debated with himself that the exercise was necessary to counter his less than healthy life style, one that included a steady diet of junk food and caffeine.  Not to mention his taste for an occasional joint.

Winding his way around the building, he glanced inside through the open stained glass window, checking to see if the altar ladies had replaced the wilted flowers near the statue of Blessed Mother.  Because Mass was still yet an hour away, he was surprised to see a young woman seated in the front pew nearest the tabernacle, apparently lost in prayer and reflection.  Her fingers played over the rosary beads with a sense of urgency, and her face a map of concern and anxiety.  He thought he should probably go inside and offer her a sympathetic, priestly ear, but the thought of of the duel water jets on his shower head, and a double bowl of cereal heaven, made him decide against it.  She was probably better off discussing her issues with the Almighty anyway.

Inside the chapel, the young woman fidgeted in the pew, clenching and unclenching the hand that held the black rosary beads.  Her eyes stared off into nowhere, and drops of sweat gathered at her hairline.  The sound of the beads clacking together echoed in the empty chapel.