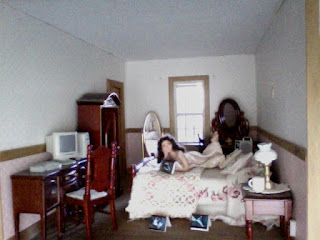 Several blocks away, Cassie McKreedy finished the last page of the novel and set it aside.  She stretched and took a long sip of her morning coffee, now very cold.  This was the third time she had read all three books in the the Fifty Shades of Beige trilogy, and each time she finished, she felt the same way...lost and empty.

Dr. Patterson had warned her she needed to attempt going out more often, and had even offered to help her try.  But deep down, Cassie knew she wasn't ready.  She had been holed up in this room for nearly a month, seeing only a hand full of people who had gained her trust.  The new meds Dr. Patterson had prescribed made her sleepy, and didn't help with the physical symptoms of her ongoing panic attacks.  The memory of the last time... the pounding in her chest, the complete dizziness, the intense and overwhelming sense of danger...made her not even want to try.

"What I really need is a couple of hours with the dominant Mr. Beige and his Purple Room of Pain," she mumbled to the four walls around her.  "Yeah, what a hoot that would be.  Oh Mr. Beige...tie me up, gag me, and paddle my ass.  And oh by the way, we have to stay inside this room like maybe forever because I'm a total freak and frickn' afraid to go outside!  What a joke, you messed up loser."  She flung the novel across the room, disgusted with herself, the novels, and life in general.

Settling into a dark mood, she pulled up the chair to her desk top computer and decided to focus her attention on her work.  Her occupation as a CPA allowed her the freedom to work from home, and she had let her accounts slide as she fussed around with the novels.  Before she could even begin, her cell phone chirped with an incoming call.  She glanced at the caller ID and frowned.

Still shaky from the call, Cassie let out a deep breath, and instantly began to delete the incriminating files from her hard drive.